Apleona has been commissioned by Koelnmesse to perform extensive installation and fitting work as part of the modernization of Hall 10. Apleona’s building technology and interior fittings specialists are installing new cooling, heating, and sanitary systems and a new ceiling grid in the three-story hall, which offers a total of 44,000 square meters of exhibition space. The aim of the work is to significantly reduce energy costs through heat recovery and improve the functionality and flexibility of the stand areas. The work has been taking place since May 2017 within tightly synchronized timeframes so as not to impair trade show operations. The modernization of Hall 10 forms part of the Koelnmesse 3.0 project, which will see the trade show company investing a total of EUR 600 million in the quality of the exhibition space and the infrastructure of the trade show grounds between now and 2030.

As part of the commission, Apleona Wolfferts Gebäudetechnik is renovating the existing rainwater and waste water systems in the two upper stories of the hall. A total of 600 new water connections are being installed in order to supply the trade show stands with drinking water, thereby ensuring that the drinking water supply meets the highest hygiene standards. Apleona’s building technology experts are also connecting the air-conditioning systems to the existing heating and cooling network via pipes.

In April of this year, the specialists from Apleona R&M Ausbau began removing the old plasterboard ceiling grid and dismantling the existing ventilation and lighting systems in order to install a new 44,000 square meter ceiling grid. The ceiling has a Halfen channel system specially developed for Koelnmesse that allows heavy lighting, decorative, and furnishing elements to be attached, thereby offering greater flexibility for designing and equipping the stand areas.

Koelnmesse has worked with Apleona since commissioning the company to install a combined heat and power unit in 2015. Completed in 2017, this construction project served to reduce Koelnmesse’s annual carbon dioxide emissions by 3,200 metric tons, as well as significantly lowering its energy costs. As part of the project, Apleona Wolfferts Gebäudetechnik was commissioned with the maintenance of the technical facilities until 2027. Apleona is also performing technical services for the trade show exhibitor and providing tailored supply and waste disposal solutions at the stands. 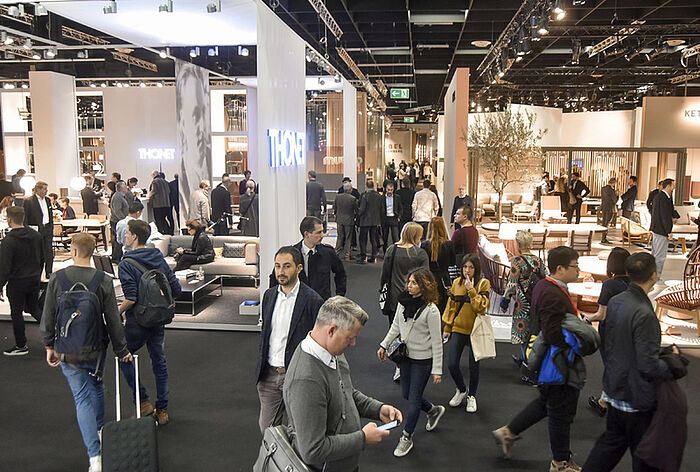